In our October edition we studied the case of a retracement survey gone wrong. Wallace owns Lot 98 and his neighbor to the north, Griffin, own Lot 97 of the Bost Estates subdivision. The original monuments for the corners of the lots (“iron axles or stakes”) were set by Fisher in 1945. This included the corners for the common boundary between Lot 97 and Lot 98, the line in controversy and the subject of the case. Ritchie found the original monuments in 1973, but his survey was discounted because Ritchie was not a licensed surveyor. Craddock found the monuments in 1990 and again in 1999, and found trees marked along the line. Flowe found the same line in 2000 and for trial expert Harris confirmed that the “Wallace Line” (as it was called, the ‘blue’ line) was monumented, marked and the true boundary line for Lots 97 and 98. 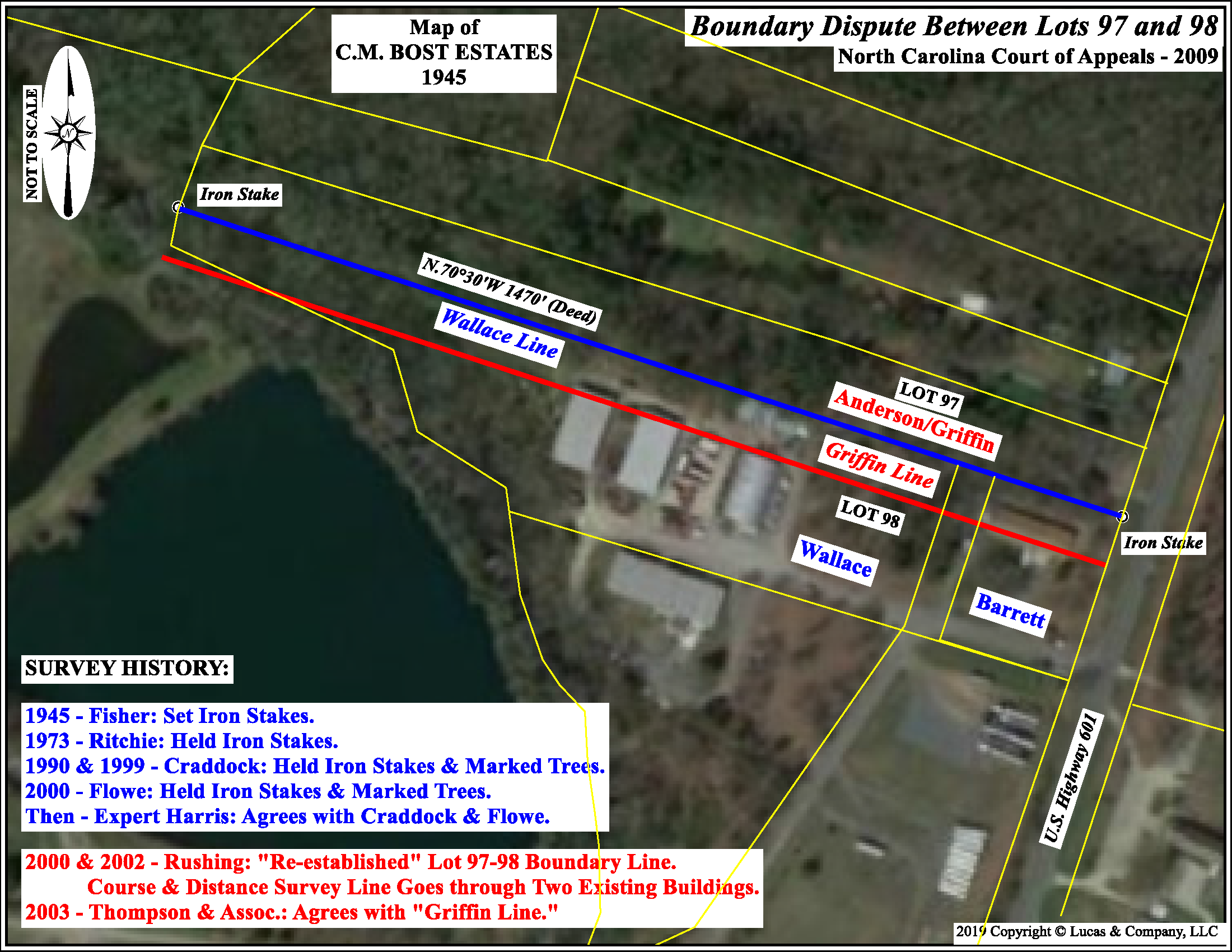 Rushing, working for Griffin in 2000, by his own admission ignored the “old axle irons” at the corners and the markings in the trees along the line in question and “built his line” using distances from other lots and “established” the supposed true corners, because he was “hired to ‘re-establish’ the line between lots 97 and 98.” This new line was referred to as the “Griffin Line” (the ‘red’ line) and was some 50 feet south of the Wallace Line and projected through two of Wallace’s buildings.

Does anybody think Rushing performed a retracement survey, or was he obedient to measurement?

The fundamental principle of retracement surveying is to find where the boundary lines have become established on the ground, not to correct them, or suggest where they should have been. The retracement surveyor ‘establishes’ nothing, the lines are already established. This reveals a elementary problem with our definition of boundary surveying, which we have discussed on may occasions. The genesis of the problem is the definition that has been promulgated by the NCEES and adopted by most of the licensing Boards across the country. From the NCEES we find that surveying boundaries is: “Locating, relocating, establishing, reestablishing, or retracing property lines or boundaries of any tract of land ….” What do these terms mean? They seem to indicate that I have options, whether I’m an original surveyor or a retracing surveyor, to do any or all of the above with regard to any given boundary line. This is precisely what Rushing did. He “re-established” the boundary line some 50 feet to the south and through two existing buildings. This is fundamentally wrong but seem to be acceptable under the definition.

What’s the problem here, the surveyor or the definition?

« The Blog is Finally Working
Blog Post and Comments »